Getting into the backcountry is all about getting away from it all, and typically that includes our electronic devices too. Camping is a chance to forgo social media, email, and all the distractions that come with being glued to our screens. However, we’d be lying to ourselves if we said that electronics were never part of a camping trip.

Sometimes it’s using a smartphone for GPS or perhaps a portable speaker to enjoy some tunes around the fire. Either way, those devices need electricity, which is in rather short supply in the wilderness. However, given the ubiquity of electronics in the backcountry, there are now a number of ways to keep everything charged during your camping trip. 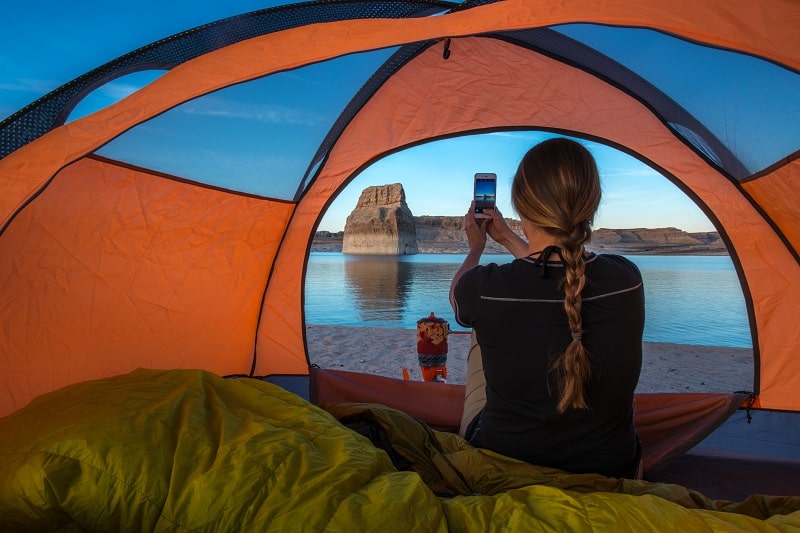 Powering up in the woods is a little more complicated than just plugging a cord into a socket, and you’ll need to ask yourself a few questions to figure out the right charging solution for your needs.

One of the most important things to understand about charging your devices is how many milliamp hours of charge your battery requires. For example, an iPhone 7 has a 1,960 mAh battery. If that’s what you’re bringing, your charging solution should provide 2,000 mAh or greater in a reasonable amount of time.

Four Ways to Charge Your Electronics in the Backcountry

There are a few different ways to keep your devices charged while you’re out in the wilderness and the option that is right for you will depend on your specific needs and the environment you’ll be using them in. 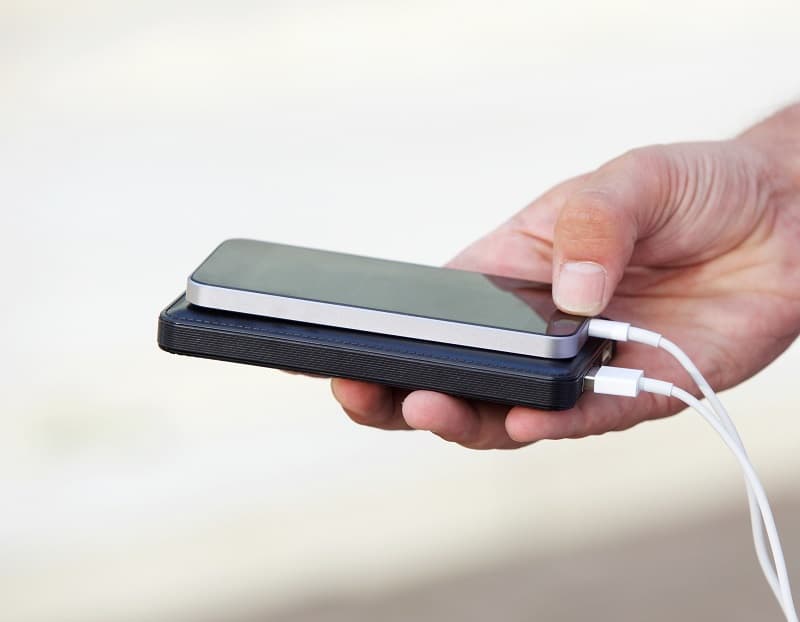 This is probably the simplest way to get some juice in your battery. A variety of different sized battery packs are sold ranging from models that are barely larger than a tube of lipstick to others that weigh a few pounds and can charge up multiple devices.

If all you’re bringing is a smartphone, you might just want to add a battery case to it. Battery cases fit snugly on the phone and provide an extra few hours of power with around 2,000 mAh of charge.

If you’re bringing several electronic devices, like a Bluetooth speaker, headlamp, and phone (all of which charge via USB), it’d be better to get something that has closer to 20,000 mAh.

Know that no matter what the manufacturer claims the battery pack has for mAh, this is only an optimistic guess. The longer you own the battery pack and the more it gets used, the less charge you can expect it to hold.

Additionally, if you charge it and then don’t immediately use it, expect it will lose some mAh. Always be conservative in your estimate of how much power is needed and then choose a battery pack that meets or exceeds those needs. 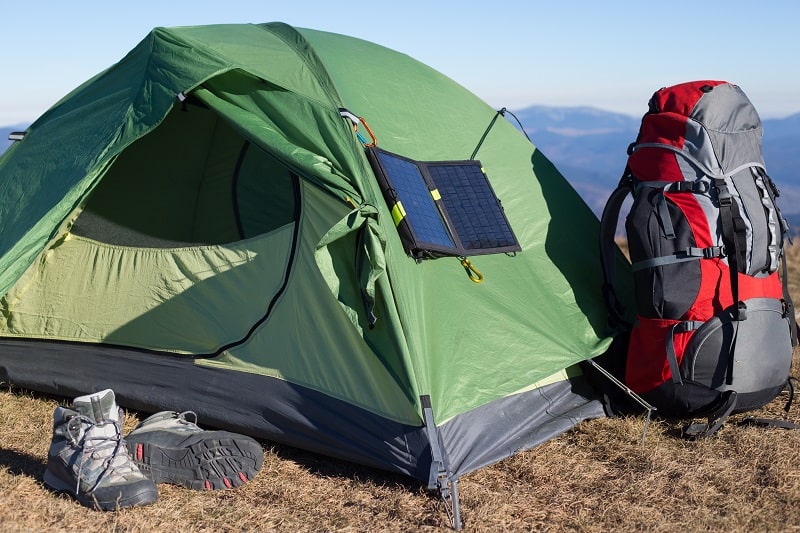 Nothing says off the grid like a set of solar panels. As long as the sun is shining you’ve got power. That’s also one of the biggest downsides to them though. The time it takes to charge devices is heavily dependent on the intensity of the sunlight reaching it.

If you’re using it at noon in the deserts of Arizona, expect your devices to be up and running in a few hours. If you camp in forever cloudy locations, like the outskirts of Seattle, it’s going to take a lot longer.

Solar panels come in a variety of shapes and sizes and some are easier to use than others. The best option for camping is the semi-rigid style of panels which can be folded down when not in use; this way you can buy a large panel setup that still easily fits inside of a backpack.

If you’re not getting enough sun during the few hours you’re at camp, it will be necessary to rig up an attachment to your backpack so that the panels can charge your device while you hike. 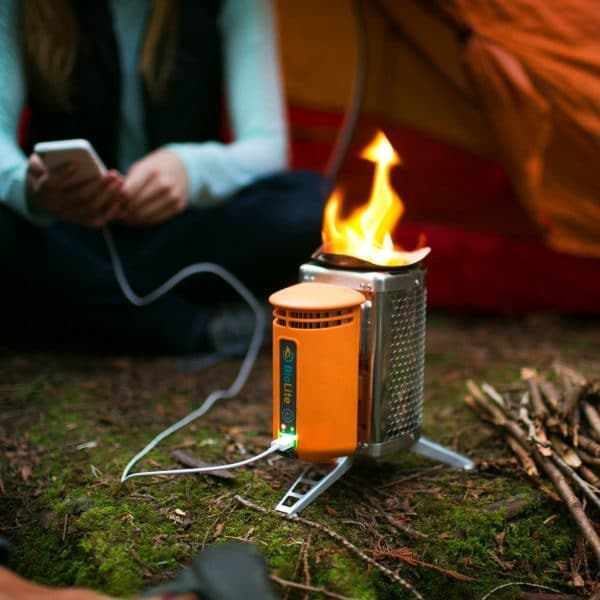 A meal and a charge, what could be better? Now you can buy a wood-burning cookstove that also produces enough electricity to charge your USB-powered devices while boiling a cup of water.

Biolite is the most popular brand out there right now with their initial designs created for customers in the developing world. The cookstoves work thanks to the magic of the thermoelectric effect, with coverts the heat from the burning wood into electricity.

If it all sounds a little too good to be true, it’s because the amount of electricity produced by the cookstove is pretty minimal. If you’re in an emergency scenario, it will get you enough charge to check your GPS or send out a text. For a full charge though, you’d need to tend the fire for several hours.

Their stoves are not capable of storing electricity either so the device will need to be plugged in throughout this process. If you decide to purchase one of these stoves, know that their primary purpose is to heat water and providing electricity is more of an afterthought.

If you’re camping with a vehicle, the most obvious solution to your charging needs is to steal some juice from the car. Small electronics like phones and tablets can be recharged via a 12-volt adapter to the car’s cigarette lighter (or many newer vehicles just have an integrated USB port in the dash).

If you’ve brought a laptop to the campsite though, you’ll most likely need a power inverter to convert the car’s 12-volt power to the 110 volts your computer requires. In the latter’s case, be careful to not run the car’s battery down to point where it won’t start up again. It’s best to only charge larger devices while the engine is running.

Keeping Everything Up and Running

Getting all your devices charged and keeping them that way can be a hassle, so only bring the things you really need on each trip. Excess electronics are just something else that can break, so pare it down to just the necessities.

Also be aware that batteries lose some of their capacity as the temperature drops. You may have noticed that your phone will show low battery in sub-zero temperatures, but once you get it inside and warmed up, it has a moderate charge left. In colder temperatures, keep electronics warm by holding them close to your body when their not in use. 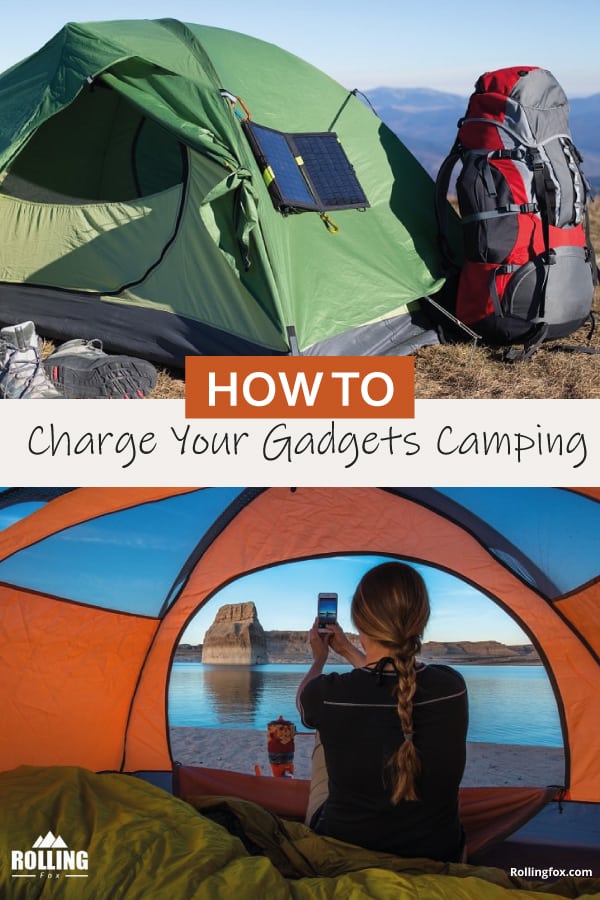