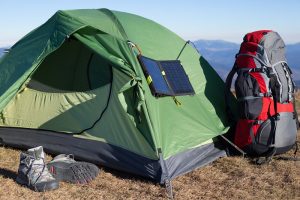 Let’s face it, you’re an addict.

Don’t be afraid, don’t be ashamed. It’s hard to face the truth but you are not alone. Most of us are addicted to the very same thing.

Your phone. Your sleek, gleaming smartphone. Even the thought of it gives you a dopamine rush. Its slick glass façade. Its movie streaming capabilities. The social media pings that keep you plugged into the matrix, perpetually unbored.

Going cold turkey is not an option. Sure, you may love hiking, but why should a hike deprive you of contact with the outside world? Isn’t it good to keep in touch? Moreover, isn’t a functioning cellphone with torch, compass, GPS and (potentially!) a signal a major asset for outdoor adventures?

Fortunately, there may be a solution to the conundrum of how to keep a power greedy smartphone functioning for days without access to a power outlet.

Portable solar chargers use sunlight to charge electrical appliances on the trail. What could be better? An eco-friendly way to let you feed your addiction even in the great outdoors!

Read on for guidance on the best solar chargers currently available!

Portable solar chargers are still in their infancy, relatively speaking. As such, there is a wide variety of features and options across the market. Let’s take a look at the kind of things you should be looking for in.

Everyone knows that phones drain their batteries quicker than they charge them. At least, that’s how it seems. If you think your battery creeps upwards at an agonisingly slow rate when it’s plugged into the mains how will you feel when it’s connected to a solar charger?

It’s well known that renewable energy sources aren’t as efficient at converting natural energy into electricity as fossil fuels. That doesn’t mean that renewals should be scorned – after all, sunlight will come again and again, oil won’t – but it does mean that you can expect a solar charger to test your patience.

If you’re a laid back type who’s unlikely to panic if your phone looks in danger of dying, the power capabilities of your solar panels may not be a big issue. If patience isn’t your thing you’ll want to prioritise obtaining a powerful charger that can replenish your phone at its maximum rate.

Be aware, though, that such power can come at a cost – a bigger, bulkier charger. Which brings us on to…

Solar chargers vary in size and shape. Some resemble conventional mobile charge packs and have a solid, weighty look, while others have a light, foldable construction that enables the panels to be packed up neatly or rolled out to cover a large surface area (thus benefiting from more solar rays!).

As previously mentioned, the drawback of charging blocks is that they can be weighty. Anyone who’s trekked for a long distance understands that literally every pound counts. Much as you love your phone you may be reluctant to add a small brick to your pack!

Lightweight solar chargers will naturally appeal to trekkers, but be wary: those of the light, foldable variety do not have batteries that can store electricity and provide it when needed. Some devices will only charge your phone as and when when their solar panels are exposed to sufficient levels of sunlight. Will this work for you when you are out on the trail?

Choosing the best charger for you may, ultimately, come down to the exact balance you’re prepared to strike between a number of complex factors: carry weight, the practicality of using them on the go, the amount of sunlight you can expect at your destination, etc.

Don’t forget to factor in water resistance into those calculations! Any item in your pack is vulnerable to downpours, river crossings or water canister leaks. Needless to say, electrical appliances are more vulnerable than most!

If you’re a major techhead the idea of only charging one device may fill you with scorn. What about my poor tablet!? How will it survive the trek?

Alternatively, you may be the kind of charitable soul only too happy to share your charger with friends – which means, of course, 100% power on their phones and 0% on yours!

Except…what if you were to select a solar charger with more than one output? You could charge two or three devices at once! Such options exist but, be wary, they will almost certainly be heavier and bulkier than one output options…

Some chargers are just show-offs. They actively brand themselves as “smart” – usually because they’re able to do things like detect the kind of device that’s attached to them and work out which wattage will replenish it fastest. This enables them to supply that exact dose of electricity in order to speed the process up.

It’s also recommended that you ensure that chargers have “auto-restart” technology built in.. That way, when the sun dips behind a cloud and the charger cuts out it will be able to restart itself when the sun reappears. You can well imagine the frustration of relying on something that requires manual intervention to restart itself!

Smart chargers may be a bit full of themselves, but they’re far less likely to have you calling them names than ones that stupidly turn themselves off when your phone is only at 11%! 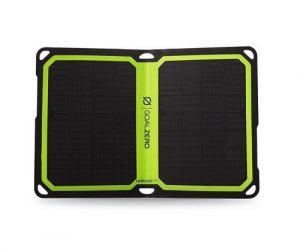 This Goal Zero offering fully ticks the “smart charger” boxes mentioned above. Auto-restart technology ensures that it won’t pack in if a cloud passes above it and it is designed to detect and fulfill the optimum supply rate of the device attached to it.

Another neat “smart” feature is an external LED that indicates the strength of the solar light striking the panel. This should help you maximise the charging potential of the panel – something that could be key given that it has no battery and will only provide charge when the panels are exposed to sunlight.

The plus side of this is the low weight of the charger – 12.8 ounces isn’t too much of a burden to add to your pack, particularly given that the panels can be folded to a pretty compact 6.5 by 8.75 by 0.75 inches!

Check the price at REI 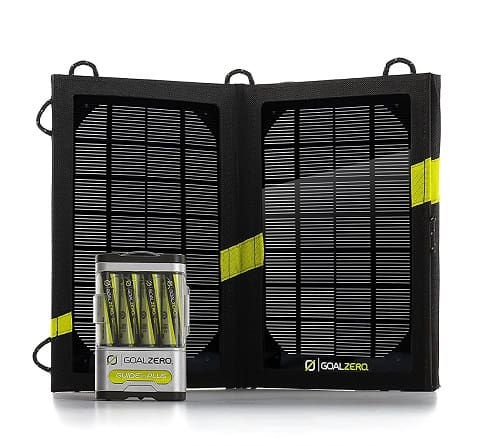 The Goal Zero Guide 10 Charger employs the same solar panels as the Nomad 7, but the addition of a power pack capable of charging four AA batteries changes the game completely. The batteries store power so that devices can be recharged within the comfort of your tent or at your leisure rather than only during daylight hours.

The battery pack will also absorb power from a computer, enabling you to head into the wilderness with a ready charged battery bank – something which is certain to bring peace of mind to those who really can’t survive without a phone.

You do pay for the addition of the battery pack in terms of weight. It adds 5 ounces to the 12.8 of the Nomad 7. However, as an added bonus the pack contains a built-in flashlight, which could, were you to drop a standard flashlight from your pack, allow you to offset the additional weight somewhat.

Check the price at REI 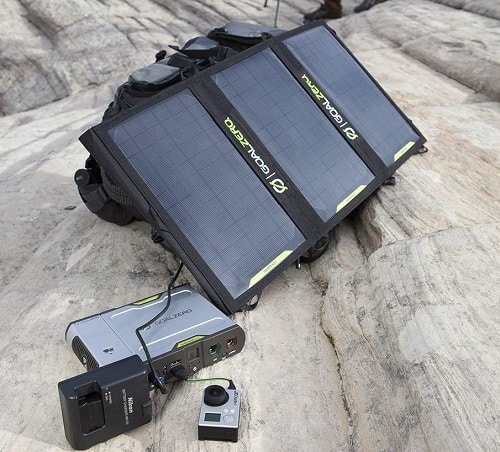 The third Goal Zero product on our list is the most powerful and boasts that it can “charge anything as fast as the wall.” The extra power capacity (20 watts in optimum conditions) means that it is the first product on this list capable of powering tablet devices.

However, the added juice inevitably comes at a cost in terms of carry weight. At 2.5 lbs the Nomad 20 is more than twice as heavy as the Goal Zero 10 and almost twice as long, too – dimensions of 8.5 x 13 x 1 inches may begin to challenge the amount of free space in your pack!

The added weight of the Nomad 20 is even tougher to embrace given that it doesn’t include a battery pack. Goal Zero state that the panel is compatible with all their battery packs, but if you don’t possess one already that’s an additional cost to be factored in. Not to mention the additional carry weight… 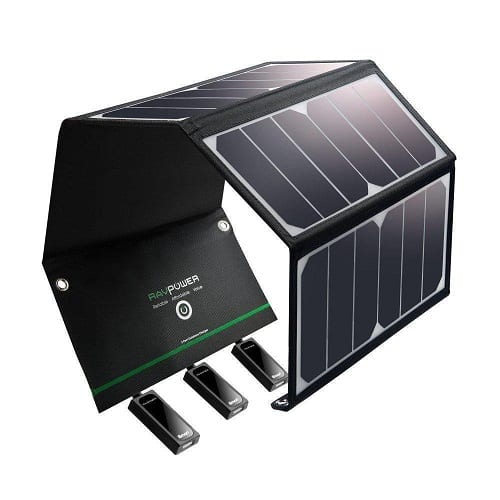 This RAVPower option boasts raises the bar even higher in terms of power. The 24 Watt potential of the solar panel could even be seen as overkill for the charging of a phone. However, this is the first product for review with more than one output.

The Rav Power comes with three outputs, enabling three devices to be charged at once, so could be the go to option if you hike with a group of friends and want to take along a panel that can keep everyone’s tech going.

Like the Goal Zero Nomad 20, the RAVPower charger does not come with a battery pack and, while it boasts of being “half the weight of similar solar chargers,” at 26.4 ounces it is unlikely to make it into a lightweight trekker’s kit. 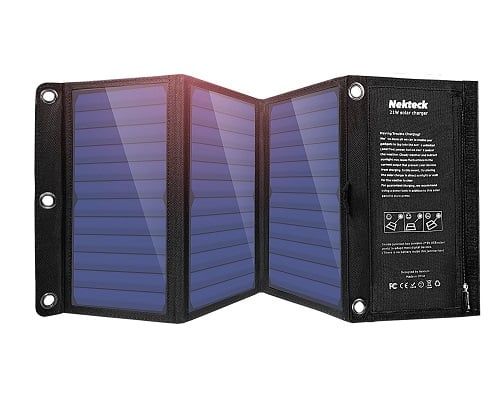 Nekteck’s 21 Watt Solar Charger may give up three watts to its RAVPower rival but sometimes less is more. The Nekteck charger is lighter, more compact and cheaper than the RAVPower offering. Its weight is perhaps its greatest claim to fame.

At a mere 18 ounces it’s less than half the weight of the Goal Zero Nomad 20 (despite possessing an extra watt of power) and only six ounces heavier than a product whose power output it triples, the Goal Zero Nomad 7 Plus Solar Panel. Simultaneous charging is available.

Two outputs are available for use and equipped with smart technology to ensure that connected devices receive optimum output for the quickest charge. There is, however, no battery pack. You will either have to charge directly from the panels in sunlight or bring along your own battery pack(s) if you plan on doing more with the daylight hours than watching your phone battery creeping from red to green!

And the winner is…the Goal Zero Guide 10 Plus Adventure Kit Solar Charger. As the only charger on the list to come with a battery pack, while still keeping its weight and dimensions very respectable (it is the second lightest and smallest of the five products), it seems indisputable that the Guide 10 is the most rounded charger of those reviewed.

The Guide 10 should fit into anyone’s pack and can be used to charge directly (from the panels to your device) or at your leisure. Let’s face it, there’s a high likelihood that the sun will dip behind clouds when you most need it to fuel your phone, it’s just how the world works, and the Guide 10 is the only option on this list that, out of the box, can help you in that situation.

That being said, those who are seeking to charge more than one device (or, indeed, larger tech like tablets) should take a serious look at the Nekteck 21W Solar Charger. With a low price relative to other chargers and double the power of the Guide 20 for only an ounce of extra weight, it has a lot of things going for it.

To solve the problem of delayed charge you could purchase a separate battery pack. This would, of course, entail extra carry weight, but maybe you could prevail on a friend to help you out in exchange for some charge!

Such speculative scenarios are, however, stretching the remit of a product review article. Out of the box, the Goal Zero Guide 10 Plus Adventure Kit Solar Charger is your phone’s best bet! 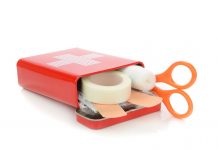 What Are the Best First Aid Kits For Hiking 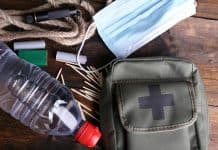 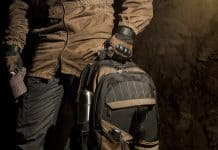