Having some way to heat water and prepare meals during a backpacking trip can be the difference between an enjoyable camping and hiking excursion and a torturous one. But you don't want to buy any type of backpacking stove before you head out.

​The best camping stove for you depends on where you're going, what you're carrying, who you're travelling with, and what you plan on heating up.

​The Camp Chef Everest two-burner camping stove offers you a lot of power in its sturdy, nickel-coated steel frame. When you’re hungry from a day of hiking or biking, and you just want to eat a good, hot meal, lets you cook just about any meal you want with full-sized pots and pans. You won’t need to struggle with matches or lighters; the auto-igniter will get things up and running for you.

Check the price here or view the full review ﻿h﻿ere. 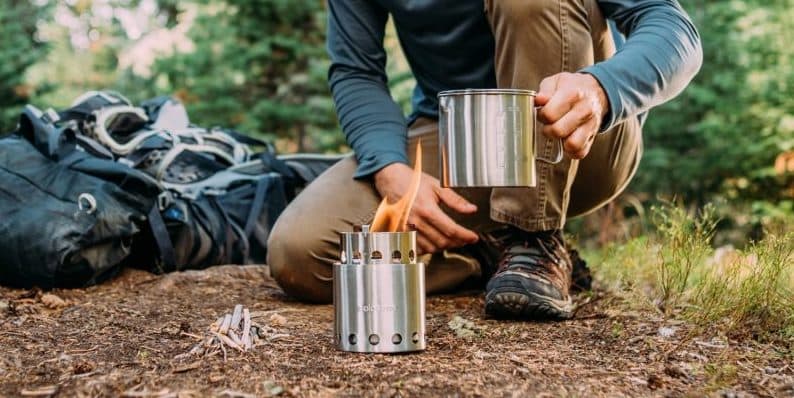 Any wood burning stove with a design like Solo’s is a good option if you want to conserve space and fuel while enjoying the feeling of cooking over an open fire. Wood stoves are easy to use, easy to fuel, and easy to clean up. Don’t limit your options only to Solo products, though; while their innovative stove design and high-quality products are notable, other great options with a lower cost also exist.

Check the price here or view the full review ﻿h﻿ere.

The Olicamp Ion Micro Titanium Stove is a simple yet innovative piece of equipment that takes the struggle of cooking out of camping. As long as you have a source of fire and the proper fuel canister, this micro stove makes a great piece of camping equipment for those who simply want to cook a quick bite to eat and continue with their adventures in the outdoors. 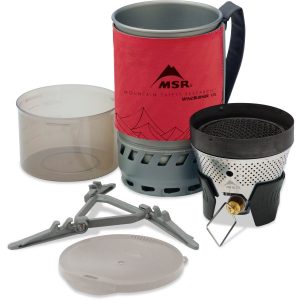 The MSR Stove can boil water in less than three minutes, regardless of the wind, elevation, or cold temperatures. It’s lightweight and packs easy, helping you reduce the supplies you have to carry with you. Finally, the stove is compatible with great accessories that can help you cook a full meal or brew a great cup of coffee.

If saving money and space are important to you on camping trips, consider using an alcohol stove for cooking next time. The Esbit alcohol stove is a cost-efficient burner made of materials that can be used repeatedly without spending money unnecessarily. Unlike cheaper alcohol stove models, the already-inexpensive burner comes with features that make cooking with alcoholic fuel just a little bit easier. 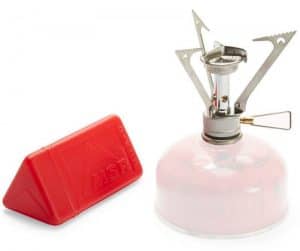 If you’re looking for an inexpensive, durable, and efficient stove to take with you on backpacking and camping trips, the MSR Pocket Rocket does the job. It’s extremely compact, and lightweight design makes it easy to carry and don’t take up unnecessary room in your pack. It’s simple to use and can quickly heat up water for cooking, making it a great companion to your other mealtime accessories.

Whether you’re looking to boil water or cook a fancy meal when enjoying the terrain at a campsite, the Coleman Triton is a great camping stove to get the job done. The dual burners make it quick and easy to whip up a meal, and the sturdy design makes it perfect for the great outdoors. All of this combined with a compact casing makes it easily portable and an attractive choice for an outdoor cook top. 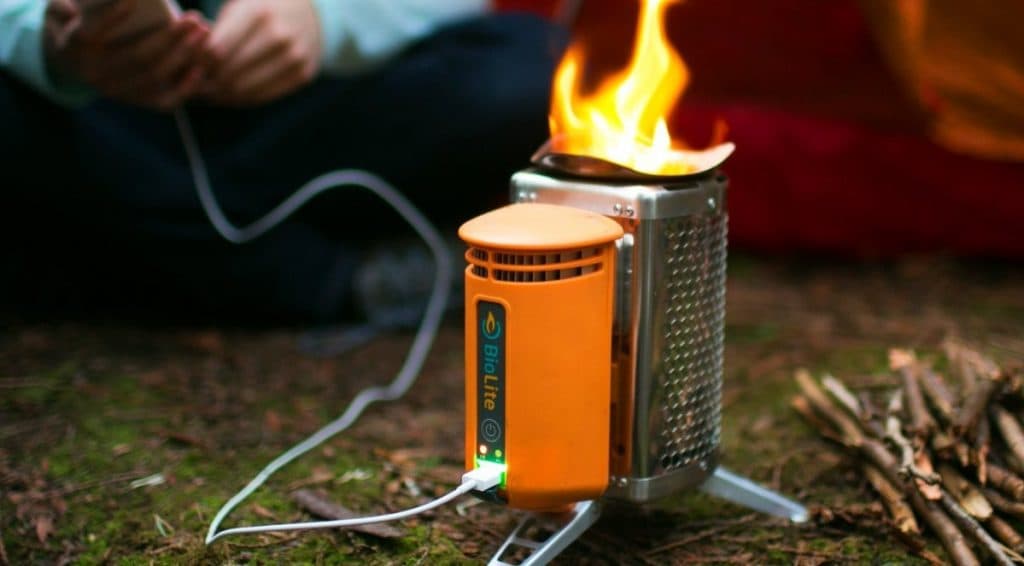 There are no shortage of portable wood burning camping stoves on the market, but if you’re someone who also likes to keep your electronic gadgets charged, the BioLite Campstove is a model that does a good job of multitasking. Its lightweight design makes it backpacker friendly, and the conversion technology that uses the heat from your fire to power a charger is an awesome perk for when you just need to check your email. 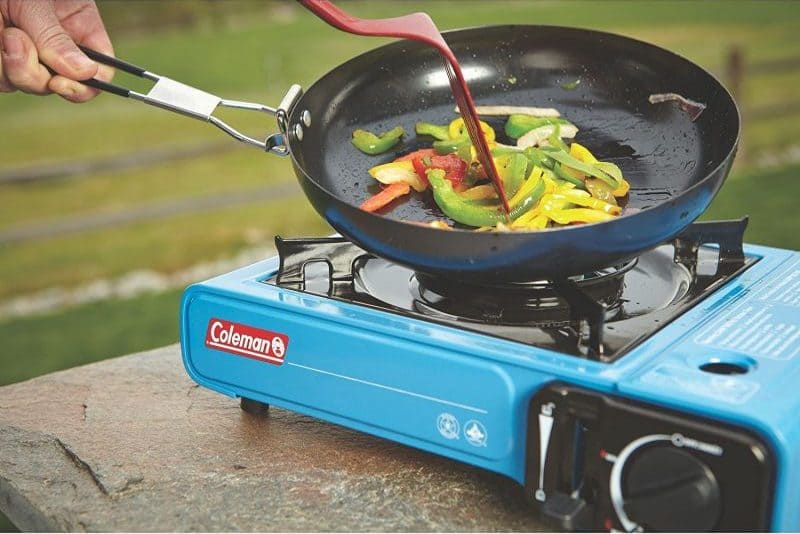 The Coleman Butane Stove is a compact camping stove with a single burner. It can hold a pan or skillet up to 10 inches in diameter. It’s useful for people who are looking to cook a small amount while car camping. It can also be a backup burner for use when your electric’s out, and you can use the stove in your home.

​The Types of Backpacking Stove

​When it comes to types of backpacking stoves, there are three major categories and a number of subcategories within each major category. The three main types of stoves are based on the type of fuel each uses.

​Within each large category of backpacking stove, you'll find lots of smaller subtypes. For example, some types of canister stoves are remote styles. That means that the canister connects to the stove with a hose. Some canister stoves also feature a small cooking pot that screws on to the top, streamlining the entire process.

​You'll find the greatest variation and number of options in the alternative fuel burning category. For example, a wood burning stove is ideal if you're heading into the woods and are confident that you'll find plenty of small branches and dried leaves to burn.

​A denatured alcohol stove is another example of an alternative fuel stove. It tends to be the lightest in terms of weight, but any weight you lost is quickly made up by the fact that you need to carry a bottle of alcohol with you to use the stove.

​The third type of alternative fuel stove is one that runs on tablets or pellets. These stoves are often praised for their tiny size and their lightweight. Additionally, the fuel they use is also very lightweight. All told, a tablet stove can weigh less than half a pound.

​Features of a Backpacking Stove

​Where you're hiking and what you plan on heating will influence the features that will matter the most to you when you're picking out the best camping stove. Generally, the longer your hike and the fewer people on the hike, the lighter you'll want your stove to be.

Often, the smallest canister stoves weigh just a few ounces. But if you decide to invest in an integrated canister stove, with an attached cooking pot, the weight of the stove can jump to a pound. That might still be less heavy than carrying a stove and a pot separately.

​Liquid fuel stoves tend to weigh more, nearly a pound, in some cases, but they also heat more intensely and more quickly and are better for preparing boiling water or food for a group of hikers.

​If you're backpacking outside of the US or in very cold temperatures, you might not be able to use a canister stove. Fuel canisters can be hard to come by outside of the US. Additionally, butane (one of the gasses used in a canister) is very sensitive to cold. (link) If you're hiking in temperatures below 31 degrees, you'll need to find a way to keep a butane/propane canister warm if you want your stove to keep working.

​When and How to Use a Backpacking Stove

​No matter what type of backpacking stove you end up using, there are a few basic safety precautions you need to keep in mind. Rule one is never to use the stove inside your tent. No matter how cold it is outside, you need to be outdoors with the stove.

​Although many stoves do have igniters attached to make lighting them a breeze, those igniters can fail. It's a good idea to have a set of matches or cigarette lighter handy just in case.

​When you use a liquid fuel camping stove, you need to do something called priming first. When you prime the stove, you light a few drops of the fuel or alcohol on fire, then use the flame to heat the fuel line, which helps it to convert the liquid fuel into a gas. If you just read that sentence and felt very nervous, you'll want to pick a different type of stove.

​The fuel tanks of liquid fuel stoves also usually need to be pumped with air before use, to pressurize the fuel inside.

​Fire can be a particular concern when you're camping and using a stove. You don't want to be the backpacking equivalent of the cow who started the great Chicago fire.

​Pay attention to the conditions in the area you're hiking in. Some parks and trails have strict bans on stove use because of the risk for forest fires. In some areas, you might not be able to use your stove at all, so plan accordingly.

​Other areas might have restrictions, but not outright bans. For example, some areas might allow canister stoves but not wood burning or alcohol stoves. It's up to you to be a responsible backpacker and to make sure that your gear complies with the rules for the part of the world you're hiking in. 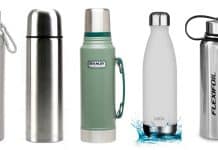 What are the Best Vacuum Flasks for Camping in 2019 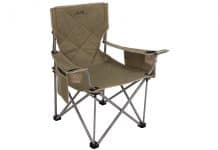 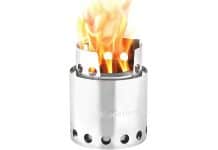 What are the Best Wood Stoves for Camping in 2019